COLUMN: The Biggest Mistake(s) of Kurz Run As AFL Commissioner 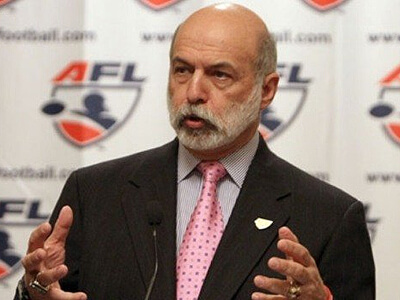 Jerry Kurz has just completed his term as Arena Football League commissioner, one that lasted from 2010 to 2014 and was marked by several highs. Kurz revived the league from chapter 11 bankruptcy in 2009, brought in the LA KISS and Las Vegas Outlaws, and was responsible for the growth of the league, getting the league tv deals with ESPN and CBS Sports Network. However, there will also be several lows and things that Kruz would like to have back for the AFL.

In Kurz’s second year as AFL commissioner, the leagues marquee franchise; the Chicago Rush, lost their ownership. The AFL took over the team, thus beginning a long process that would dominate the league for 3 years. After running the Rush in ’11 and 2012, the league found a buyer; Julee B White. It seemed like the AFL had saved the Rush, but months later the AFL terminated the ownership because she did not pay employers. On February 8th 2013, the Rush were sold to David Starral Jr. Once again, the AFL seemed to be in the right direction. Except for one thing: Starral was a criminal. What was just as shocking is that the AFL did not do a background check on him. The AFL again took over the Rush, but this time they could not find anther owner, folding the team. That is on Kruz. How you let a thief take ownership of your marquee franchise is just ridiculous; and since the AFL has done background checks on prospective owners. That was his first big mistake, but that was nothing compared to how he handled the Talons ownership situation.

After the AFL took over the team in January 2014, Armando Montelongo announced he was interested in buying the Talons and was in negotiations to buy the team. Kurz decided to tell him “we will run the team ourselves” instead, setting the stage for the Talons 3-15 season. That move seemed bad, what Kurz did to the Spurs was not even describable. Spurs Sports And Entertainment; the group that owns the NBA Champion San Antonio Spurs, San Antonio Stars(WNBA), San Antonio Rampage(AHL) and the Austin Spurs(NBAD-league) was in negotiations to buy the Talons in August. This could have been maybe the biggest thing to ever happen in AFL history. While KISS owning a team and getting ESPN back to the AFL airwaves was big, having a class organization like the San Antonio Spurs owning a team would have been huge. Apparently, Jerry Kurz must not have known about the Spurs, and rejected their offer. The Talons have gone dormant since. Weeks later, Kurz was demoted to AFL President; Scott Butera is now the commissioner.

Theres a saying that Pete Rozzels biggest mistake as NFL commissioner was playing games the weekend JFK was assassinated. Jerry Kurz biggest mistakes as AFL commissioner will be selling marquee teams to owners while not doing a background check and rejecting offers from class organizations like the Spurs. With Butera now the guy, it will be
interesting to see how the AFL goes from here.

10 thoughts on “COLUMN: The Biggest Mistake(s) of Kurz Run As AFL Commissioner”